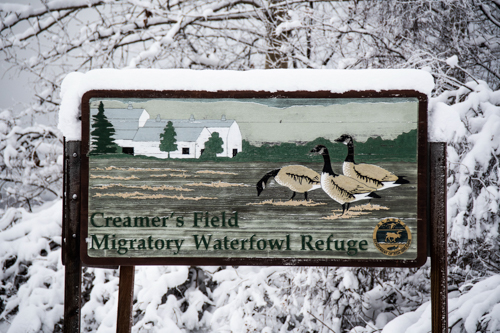 Each spring, thousands of migrating waterfowl stop in Fairbanks on their way to their northern breeding grounds.  These birds have flown many miles from their southern wintering grounds, often arriving in the Golden Heart City before the snow melts, usually in early April.  Numerous species arrive every year, including swans, ducks, geese, and sandhill cranes.  The Refuge also provides the jumping off point for birds after the breeding season, and before they once again take to the air for the southern wintering grounds.

The Refuge is owned by the State of Alaska, and managed by the Alaska Department of Fish & Game (ADFG), which covers over 2,000 acres of forest, wetlands and fields, and is home to resident birds including raptors, ravens, grouse, chickadees and redpolls, plus numerous mammals, both small and large.  Wood frogs can also be found, an amphibian that can survive the brutally cold winters thanks to an internal “glycol system” that allows their bodies to freeze solid and return to life each spring.

At the end of the Garden season of 2019, a “Plant America” grant from the In the early 1900s, Creamer’s Dairy was the largest dairy operation in the Interior of Alaska, and remained in operation until the mid 1960s.  The herd size of over 100 milk cows produced milk, cheese, ice cream, etc., and the dairy was one of the most successful operations in the area.  Some of the buildings on the property were constructed in the 1930s, and remain today and are listed in the National Register of Historic Places.  The fields at the front of the Refuge are managed by ADFG, and each spring the snow is plowed off the grounds, and feed is planted for the migratory birds.

The Refuge is open year-round to visitors, and there are numerous activities in which the general public can participate.  Some programs are geared for children, some for adults, and always for families.  There several miles of clear trails, including a wheelchair loop, several viewing stations, seasonal wetlands and free parking.  Winter activities include cross-country skiing, skijoring, and hiking.  The northern side of the Refuge joins the Jeff Stoddert Race Grounds, where sprint sled dog races begin and end, crossing some of the winter trails on the Refuge.  Several major seasonal activities include the Spring Equinox Walk, Spring Migration Celebration, Camp Habitat for kids, Design Alaska Wild Arts Walk, Tanana Valley Sandhill Crane Festival, Thanksgiving for the Birds, and Winter Solstice Walk.

Tom Schneider is a photographer, and lives with his wife, one dog and four cats in Fairbanks.  He is retired for the second time, and enjoys all things outdoors, especially fly tying/fishing, hunting and photography, and serves on the Friends of Creamer’s Field Board of Directors.