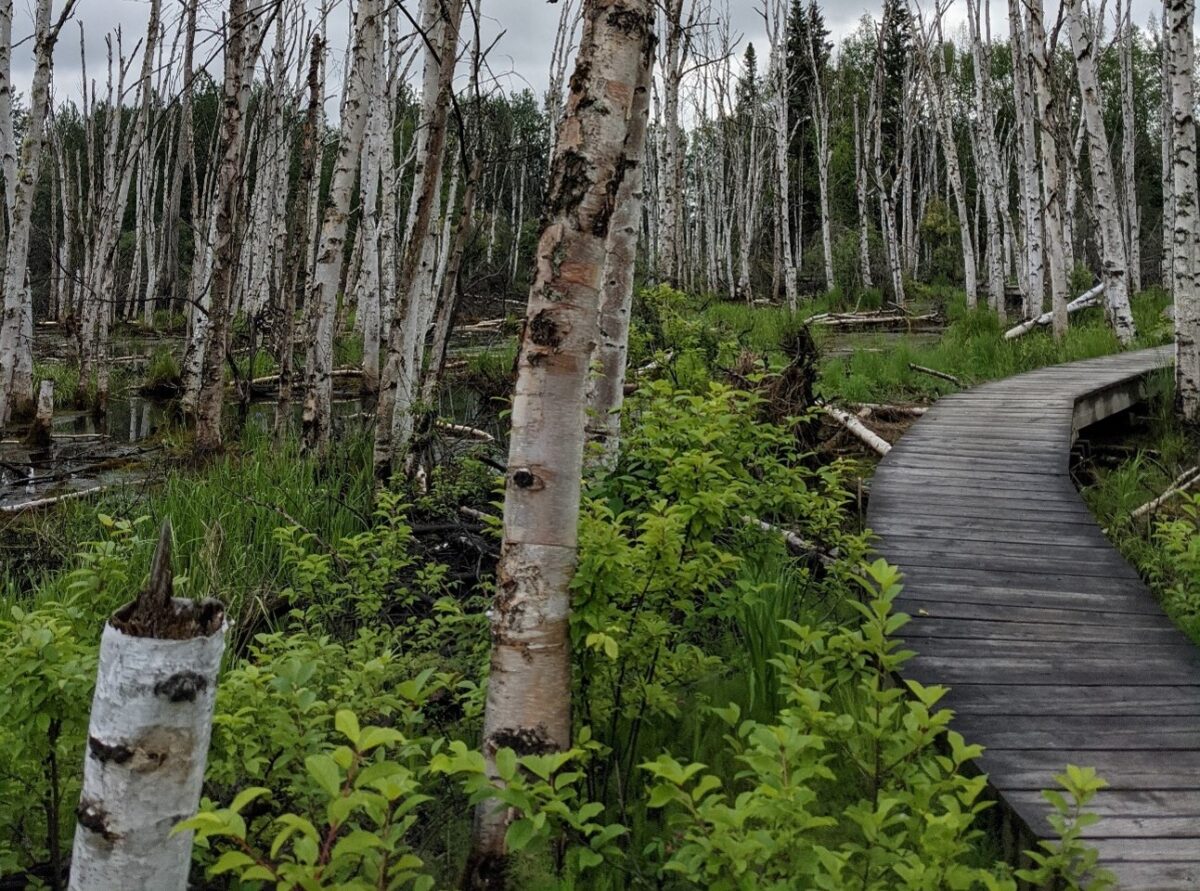 Prunus padus and Prunus virginiana (hereafter referred to as Prunus spp.), commonly known as European Bird Cherry and Chokecherry, are native to Northern Europe and across Asia; so how did they get all the way over to Alaska? Both Prunus spp were introduced around 1959 in Alaska by the Alaska agricultural experiment station in Palmer, as an effort to increase tree fruit culture in Alaska. Since then, both Prunus spp. have become common ornamental trees that are planted in residential areas and in public parks. The first collection and record of chokecherry spreading into natural areas was documented by Welsh in 1968 in Palmer. A year later it was documented in the surroundings areas of UAF. Since escaping cultivation, it has spread into native riparian habitats as well as intact forests in the Anchorage, Mat-Su, Kenai, Southeast and Fairbanks areas. Currently, both Prunus spp. are considered aggressive invaders (each has a high invasiveness rank of 74 according to the Alaska Natural Heritage Program invasiveness ranking system) that can form monocultures in natural forests and riparian areas and have negative impacts on native fish and wildlife populations.

Prunus spp. are a deciduous tree that can appear as a shrub or small tree and can grow up to 10m tall. The trees are rounded in shape and have low branching crowns, and their bark is a purple-grey to green-grey color. The leaves are ovate, elliptical, and they have sharply serrated edges. Along a branch, the leaves alternate. These ornamental trees are known for their showy flowers, which are usually white or cream-colored, and that bloom usually between May and early June.

Prunus spp. are very hard to differentiate from one another. Here, we highlight key characteristics that differentiate the two species from each other. Most taxonomists dissect the flower and examine the level of hairiness of the hypanthium (a cup-shaped extension on the base of the flower)-this gives a good indication as to which species it is. Also notable, late in summer Prunus virginiana leaves change to a reddish color, while Prunus padus leaves remains green.

The Prunus spp. reproduces and spreads via the seeds of their fruit, in which birds eat and then distribute far and wide from the original tree. Another equally effective reproduction method is through growth of bare roots and distribution along streambanks. Chokecherry’s ability to reproduce so readily allows it to take over the understory of intact native forests. It can create thick thickets and shrub layers that reduce light, moisture, and nutrient availability to native species, thereby outcompeting and displacing them. In addition to outcompeting native species and reducing local biodiversity, chokecherry coverage displaces terrestrial invertebrate biomass and also disrupts moose habitat and food availability. The chokecherry is known to produce cyanogenic glycoside, especially during the cold winter months, which can be toxic to mammals with segmented stomachs. There have even been cases of poisoned moose calves in Anchorage, AK. The Prunus spp. monocultures have been documented to decrease terrestrial invertebrate along streambanks, which in turn affects the food availability for young salmon and other native fish species. It is clear that even though these trees make for beautiful gardens and human consumption (i.e use of chokecherry berries for jam, etc) their detrimental impacts of their spread on native ecosystems are cause for alarm.

Because Prunus spp. can survive temperatures as extreme as -33° F, their distributional range extends as far as the southern side of the Brooks Range, north of the Arctic Circle (Fig.1 and 2). Yet, despite their invasiveness and clear threat to pristine areas of interior Alaska, there is limited knowledge on their actual distribution, making it difficult to monitor and develop effective management plans.  Therefore, in order to assist in the conservation of our natural areas, we are carrying detailed surveys documenting the distribution and abundance of Prunus spp. in the Fairbanks and surrounding forest’ areas such as Creamer’s Field Migratory Waterfowl Refuge.

We surveyed a total of 38 plots along the main trails at Creamer’s Field, documenting tree species diversity, abundance, tree life stage (sapling, juvenile or mature), canopy cover and species richness of the understory vegetation. We then mapped the Prunus spp. distribution in the refuge (Fig. 3) and found that all trails have been infested with chokecherry who are currently juvenile or in the sapling stage. These findings suggest that the spread of Chokecherry was more than likely facilitated by nearby planted mature fruit bearing trees, such as the mature tree highlighted in yellow a dot on our map (Fig. 3). In addition, we noticed that all chokecherry were within 5 meters from the boardwalk or trail (Fig. 4).

Overall, trail systems are vulnerable because they are frequently trafficked, which makes them highly susceptible to invasive species. This gets exacerbated when the trail system occurs in habitat that is suitable for the invasive. As in the case of chokecherry, the boardwalk is placed over wetlands which is the preferred habitat for chokecherry (Fig.4).

Unfortunately, if a Chokecherry tree is cut down, the tree is readily capable of re-sprouting from stumps, stems and from roots. By cutting down the tree, it actually stimulates this regrowth and reproduction, making it a very tricky invasive to get rid of or to manage. Therefore, the best ways to manage and control the Chokecherry tree is by entirely removing or by killing all parts of the tree. Simply cutting the tree is not enough nor sufficient in their removal because of their easy regrowth. For the time being, herbicides are known as the most effective form of management and control; herbicides result in the total removal of the tree and entirely eliminates the risk of regrowth. The easiest time to remove the Chokecherry is as a sapling and/or as a juvenile tree; these stages of the Chokecherry tree can be easily removed by hand, which is exactly what we are doing!