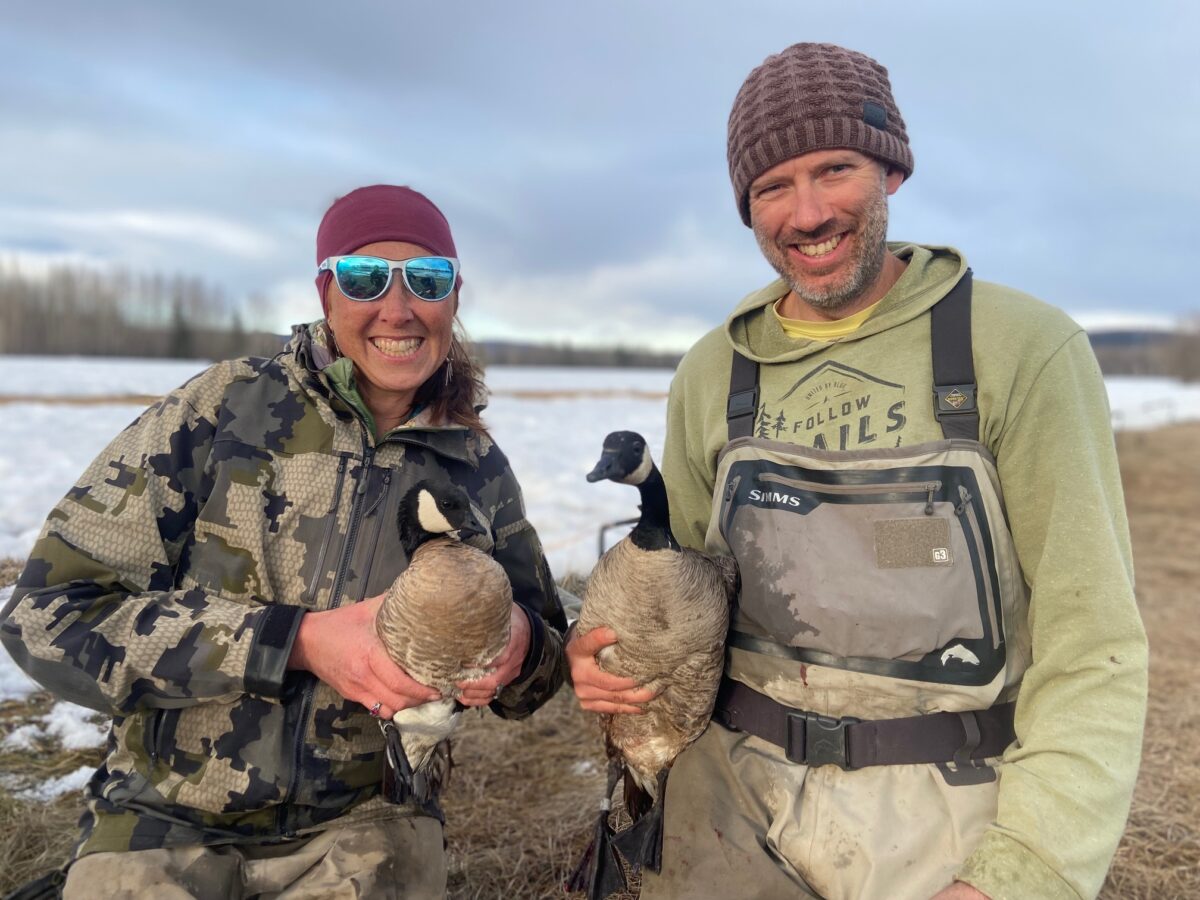 Over the last few months, the Alaska Department of Fish and Game (ADF&G) Statewide Waterfowl Program staff have been developing a research project focusing on white-cheeked geese.

According to the National Audubon Society, the white-cheeked geese of North America were long considered a variable species of Canada Geese. It was not until 2004 that four of the smallest forms (Richardson’s, Aleutian, Taverner’s, and Minima) were recognized as their own distinct species known as Cackling Geese. The seven species of Canada Geese are the Atlantic, Interior, Giant, Moffitt’s, Dusky, Vancouver, and Lesser.

In this research project, ADF&G is focusing on Lesser Canada Geese (Branta canadensis parvipes) and Taverner’s Cackling Geese (B. hutchinsii taverneri). These two species of geese are common in Alaska, though relatively little is known about them.

In the late 1990’s, a University of Alaska Fairbanks graduate student, Dr. Michael Eichholz, conducted research aimed at mapping the winter distribution of these two species in the Lower 48 using metal leg bands and plastic visual resight collars. While Eichholz’s research was informative, he was unable to definitively assign individuals to species due to their similarity. He also had a limited amount of data to work with due to the methods available to him; band recovery locations from hunters and collar resights.

In the 20+ years since Eichholz completed his research, anecdotal observations have suggested that distributions of Lesser Canada and Taverner’s Cackling geese may have shifted considerably. Recent research on Taverner’s geese by Dr. Chris Latty and Dr. Sadie Ulman of the US Fish and Wildlife Service (USFWS) revealed that Taverner’s geese marked with GPS collars on the North Slope of Alaska migrated as far south as New Mexico. This was much further south than Eichholz’s research demonstrated. The research project being developed by the ADF&G Waterfowl Program is aimed at gaining detailed information about seasonal distribution and migratory pathways of these two species by using a combination of metal leg bands to provide hunter harvest data, plastic neck collars to provide resight data, and a large number of GPS collars that will provide daily information about bird locations. Genetic analyses will also be used to definitively determine species of marked birds. This project will provide valuable information about which species is being counted in Alaska during breeding season surveys and which species is being harvested in other states/provinces throughout the Pacific Flyway.

While the ADF&G Waterfowl Program was developing the research described above, the ADF&G staff who manage Creamer’s Field developed an interest in gaining more information about behavior of geese using the Refuge: How long the birds remain at Creamer’s in Spring and Fall? Where do birds breeding in the Fairbanks area nest? Lastly, is the management of Creamer’s Field succeeding in concentrating geese away from the Fairbanks International Airport and nearby military bases?

In early 2022, Creamer’s ADF&G staff contacted the Waterfowl Program staff to discuss their interest in learning more about geese in the Fairbanks area. Fortunately, the same GPS collar technology that Waterfowl Program staff were planning to use to address their questions can be used to address the questions of the Creamer’s Field staff so the decision was made to develop a collaborative multi-focus research project.

In late-April 2022, Waterfowl Program staff traveled from Anchorage to Creamer’s Field to initiate a pilot project aimed at working out the logistics of trapping geese at Creamer’s Field and to obtain some DNA samples so that a genetics lab can begin testing lab procedures for species determination.

In close collaboration with ADF&G staff at Creamer’s Field, Refuge Manager Ryan Klimstra and Wildlife Technician Nate Lashomb, the Waterfowl Program staff were able to capture, leg band, and collect blood samples from approximately 20 geese. From the current data and observations, we only caught Lesser Canada geese; though DNA samples may tell us differently. There was a flock of Taverner’s Cackling geese spotted the first evening of the project, but they did not come close to the capture area. We did capture a single Minima Cackling Goose (pictured), the smallest of the Cackling Goose subspecies, which was very exciting! Given that this pilot effort was successful, we intend to move forward with the larger project and will begin deploying GPS collars later this year.