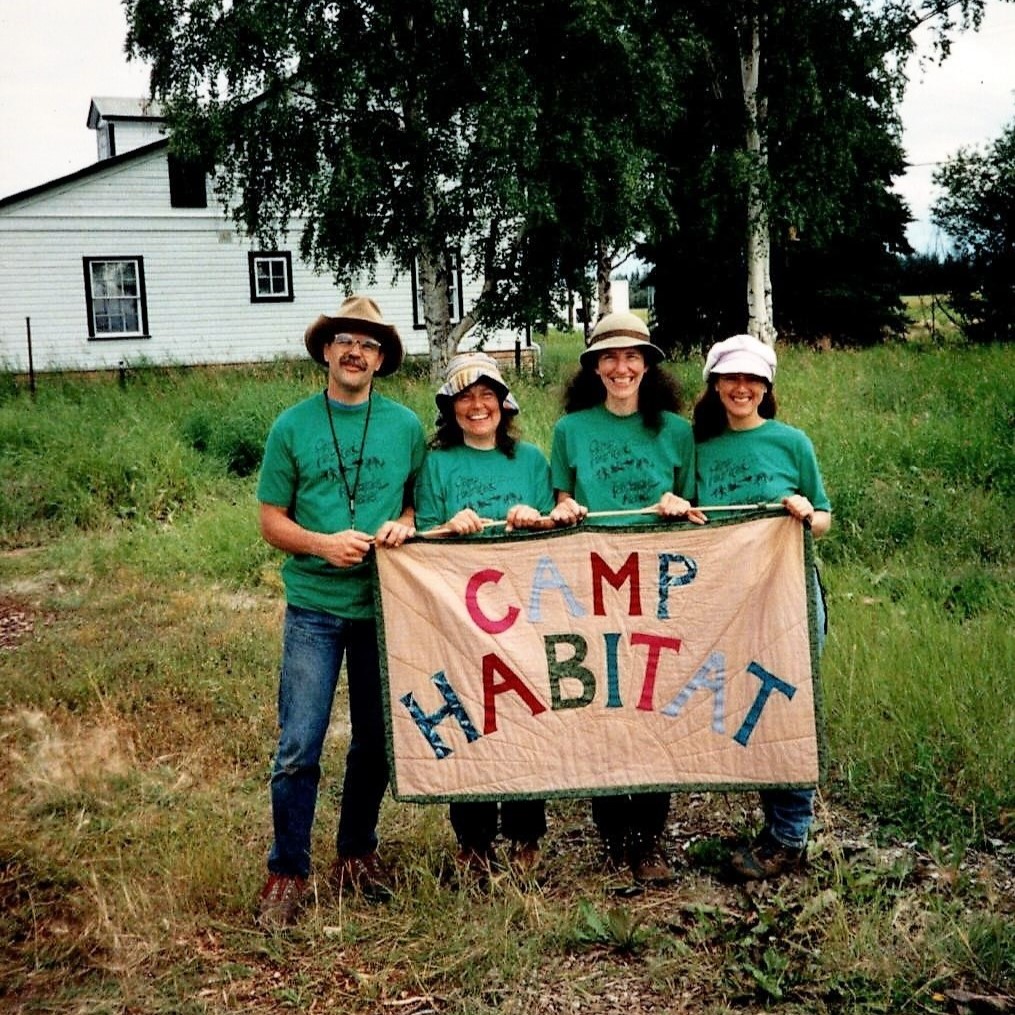 Photos of Camp Habitat at Creamer’s Field in the 1990s.

On July 23, current and former Camp Habitat collaborators and alumni celebrated its 30-year anniversary of operation at Creamer’s Field Migratory Waterfowl Refuge. They commemorated the celebration with nature walks, camp songs, and reminiscing on previous years of camp.

The inception of this dream for a nature-based summer camp for kids began and was conceptualized by Susan Grace Stoltz, a local environmental educator. That dream became a reality in the summer of 1992 when she launched Camp Habitat! In the decades since, Camp Habitat is a much sought-after summer program and has reached over 5,000 kids teaching them about the importance of nature and their place in it!

The staff and campers exploring the fields and boreal forest in the 1990s.

The last time Camp Habitat operated at the refuge was the summer of 2019, and even that session was marred by a smokey wildfire season. The camp collaborators, the Alaska Department of Fish and Game, the Northern Alaska Environmental Center, and the Friends of Creamer’s Field, waited patiently for the last two-years to begin planning for camp again. Finally with the help of all collaborators, camp staff, community volunteers, and the advisory board, Camp Habitat was back at Creamer’s Field in 2022!

Prospective families were very eager to sign their kids up for the 2022 session after the two-year hiatus due to the Covid-19 pandemic. Once registration was announced in late March, over 200 campers ranging from ages four-eleven were signed up and were excited to be a part of camp this summer. There were four sessions of Camp Habitat that happened over this summer: two half-day weeks in June for the four and five-year-olds, and two full-day weeks in July for the six–eleven-year-olds. This year, we had Hannah Johnson (pictured below) serve as the Camp Director, being a former staff member herself for many years. The rest of the camp staff were ready and excited to learn about the ecology of the refuge and pass that knowledge to the young campers.

Campers had a fun week ahead of them full of camp songs, nature games, exploring the various habitats of the refuge that included the meadows, the wetlands and ponds, and the boreal forest. They learned all about the plants, animals, birds, fish, and human interactions with their local environment.

Each of the nature themes was spotlighted at the beginning of the day with singing the “Habitat Song”, with each verse highlighting habitat themes and interactions that the campers will explore.

The Camp Habitat song chorus and lyrics are below (sung with Lollipop rhythm by Ronald & Ruby):

If you want to help ensure that Camp Habitat will be around for another 30+ years, donate here!

Your donation aids in carrying on the legacy of Camp Habitat at Creamer’s Field and will help youth discover what makes where they live special!