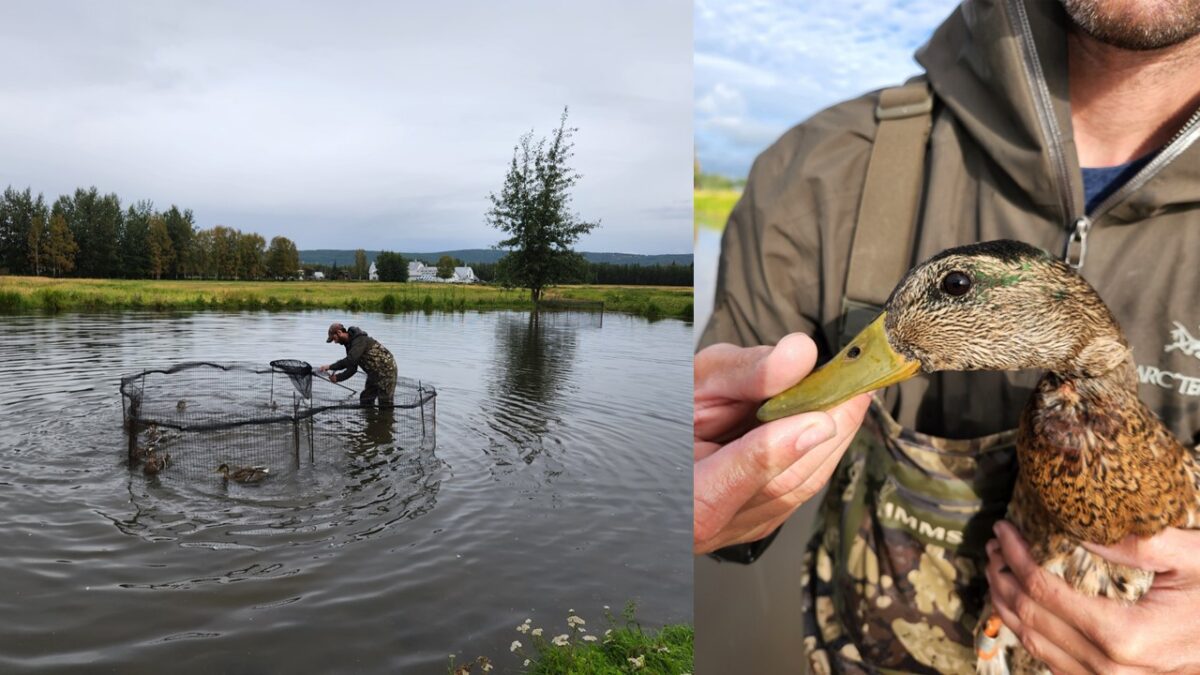 Waterfowl banding occurs all throughout North America and is a useful tool in the monitoring of waterfowl species. As fall migration was getting underway, the Alaska Department of Fish and Game (ADF&G) conducted waterfowl banding throughout Alaska with a statewide goal of banding 6,000 Mallard ducks. Typically, the Interior banding effort is performed at a banding station on Big Minto Lake. However, due to high water levels, wildfires in the Interior, and equipment availability, the 2022 fall banding operation occurred at Creamer’s Field Migratory Waterfowl Refuge.

The operation at the refuge was headed by ADF&G Wildlife Technician, Nate LaShomb, along with other banders and volunteers from ADF&G, the U.S. Fish & Wildlife Service, and the University of Alaska Fairbanks.

The ducks were captured using a swim-in trap technique (right photo). This involves a baited trap that acts much like a crab pot in which the birds were allowed to enter the trap via an opening but are unable to leave the trap. The birds were retrieved from the trap and affixed with a metal United States Geological Survey (USGS) tarsal leg band (left photo). This band does not harm the bird nor affect its quality of life and it gives the individual duck a unique identity for when it is recaptured by other researchers or harvested by a hunter. While Mallards were the intended waterfowl in this banding study, other waterfowl banded included American Green-Winged Teal, Northern Pintail, American Wigeon, and Northern Shovelers.

All waterfowl captured were also sampled for Avian Influenza via oral and cloacal swab as a part of a nationwide surveillance effort. The data collected from recaptures or harvests will allow researchers to learn about population metrics such as survival rates and migration patterns. Data collected also helps land managers create desirable habitats for waterfowl.

This past August, just under 600 ducks were banded at Creamer’s Field which included Mallards, Northern Pintail, American Green-winged Teal, American Wigeon, and Northern Shovelers. The areas where banding took place were on four total ponds, two of which were located in the front Migration Field visible to the parking lots and Creamer’s Lane.

This summer also saw the continuation of the white-cheeked goose banding project that began back in April at Creamer’s Field. ADF&G is focusing on differentiating Lesser Canada Geese (Branta canadensis parvipes) and Taverner’s Cackling Geese (B. hutchinsii taverneri) in Alaska and monitoring their seasonal distribution and migratory pathways. The refuge welcomed back Michael Guttery and Tasha DiMarzio from ADF&G Waterfowl Program.

The research project aims at gaining this detailed information about these two species by using a combination of metal leg bands to provide hunter harvest data, plastic neck collars to provide resight data, and GPS collars that will provide daily information about bird locations. Several Canada Geese were captured using cannon nets at Creamer’s Field and in various locations in the region, and were outfitted with GPS collars. Genetic analyses will also be used to definitively determine species of marked birds. This project will provide valuable information about which species is being counted in Alaska during breeding season surveys and which species is being harvested in other states and provinces throughout the Pacific Flyway.

If you have found or harvested a banded bird, please report it here. You will need the band number, or numbers, if the bird has more than one band.

Lastly, working with waterfowl can have its casualties and thankfully all smartphones involved made a full recovery after an unfortunate encounter with fresh goose droppings.

Information and photos compiled by Melanie Graeff, the Programs & Events Coordinator with the Friends of Creamer’s Field.